Throughout their careers, some vessels acquire a certain mystique that sets them apart from other ships. CSS Acadia, the Maritime Museum of the Atlantic's Canadian Scientific Ship, is one such vessel.

What's in a Name?

Acadia was launched in 1913 at Newcastle-upon-Tyne, England at the yards of Swan, Hunter and Wigham Richardson Ltd. She was the first vessel specifically designed and built to survey Canada's northern waters, and her career took her from the dangerous, ice-infested waters of Hudson's Bay to Nova Scotia's South Shore. In her early years, she was responsible for pioneering hydrographic research in Canada's Arctic waters. At the end of her career, she was used to chart the coast of Newfoundland after it joined Confederation in 1949, creating entirely new charts and updating some that were nearly a century old.

Acadia also holds the distinction of being the only surviving ship to have served the Royal Canadian Navy during both world wars. She served as a patrol and escort vessel from 1916 to 1919. She received minor damage in the Halifax Explosion in 1917 while acting as a guard ship in Bedford Basin, making her the only vessel still afloat today to have survived the Halifax Explosion. Acadia was recommissioned as a warship in 1939 serving first as a patrol vessel and later as a training ship until the war's end in 1945. 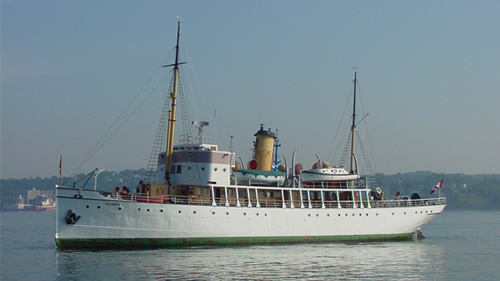 Acadia remains a classic example of the best that her British builders had to offer. Built during the Edwardian era, her splendid lines run uninterrupted from the straight bow to a graceful counter stern. With her two masts and her single funnel, she resembles a small steam yacht more than a hardworking survey vessel.

Her interior displays a class of marine craftsmanship typical of that great tradition. Beautiful mahogany and oak panelling and fine brasswork are found throughout the quarters of the hydrographic staff and officers, giving them accommodations that suggest the great ocean liners of the same era.

So strongly built was Acadia's ice-strengthened hull, that she was often employed as an auxiliary ice breaker in her early years, something for which she was not really designed and which gave her masters and crew an occasional nervous moment.

As a state-of-the-art vessel and an important part of the operations of the Canadian Hydrographic Service, Acadia often pioneered the testing and development of new technology. But despite all the cutting edge equipment introduced aboard Acadia, her triple-expansion steam engines and two coal-fired, Scotch marine boilers were in operation until she retired. This made her a rarity among the Hydrographic Service's fleet and made her easy to spot as she entered port trailing an unmistakable trail of black smoke.

1913 - Acadia was the first ship in the hydrographic fleet to be outfitted with the new wireless telegraphy system designed by Marconi to keep the ship in contact with shore stations and other vessels. This later included the introduction of an alarm system to alert operators of incoming distress calls, devised by Marconi after the loss of RMS Titanic in April of 1912.

1928 - A Sperry gyro-compass was added to the ship, a tremendous advance over the older magnetic compass, as it improved accuracy and reduced magnetic deviation. The new system was tested extensively during Acadia's Arctic expeditions.

1929 - A British Admiralty designed echo sounder capable of recording depths over 500 fathoms was tested on the ship, and subsequent improved devices have also been used aboard Acadia.

After 56 years of service, Acadia was retired in 1969. For the next 12 years, she remained berthed at the Bedford Institute of Oceanography. Many of her former crew volunteered to assist with her maintenance and to give tours, a testament to the devotion they retained for the grand old lady. Further recognition came in 1976 when she was designated a National Historic Site.

In 1982, she moved to the wharves behind the Maritime Museum of the Atlantic and became part of the Museum's collection where she is the subject of a program of continuous restoration and maintenance.

Every five years, Acadia is towed across the harbour to be dry-docked for an underwater hull inspection and repainting. The work also involves placing zinc anodes along Acadia's underwater hull. These sacrificial anodes, as they are called, prevent underwater corrosion of ships' hulls. The more active metal of the anode will be "sacrificed" before any of the less active metal on the steel hull it protects.

Her ice-strengthened hull is still impressively strong, but during her last visit to Dartmouth, a piece of new steel plate was fitted above the rudder. The placement of the new plate was done with remarkable skill, and with the addition of simulated rivets, it is difficult to see where the new section was placed.

Her boilers no longer function, but the engine remains immaculately maintained. Throughout her new career, Acadia has continued one of the sea's great shipboard traditions, that of keeping a faithful ship's cat. Since 1982, Acadia has been home to four rodent control officers.

She is still a popular spot for her former staff and 1988 saw over 100 former crew and families return to the museum for a gala 75th anniversary tribute. Prior to this many interviews were conducted with the crew, giving us an impressive oral history of the vessel and her career.

CSS Acadia remains a most beautiful reminder of her era, the finest example of a rivetted hulled vessel in the museum world today. As such and because of her splendid career, she is more than just another ship. CSS Acadia continues to fascinate, intrigue, and delight young and old alike.

The Canadian Hydrographic Service - Makers of Canadian charts and the agency which built and operated CSS Acadia.

Grand Old Lady: A personal tribute to the CSS Acadia by Rod Desborough, an old friend. (2010) Published by author. An illustrated history of Acadia written by a former crew member and museum volunteer.