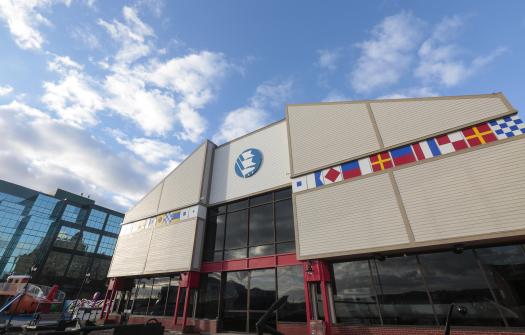 The Maritime Museum of the Atlantic is the oldest and largest Maritime Museum in Canada. The original concept of the Museum can be credited to a group of Royal Canadian Navy officers who envisioned a maritime museum where relics of Canada’s naval past could be conserved.

Starting with a small space at the Halifax Dockyard in 1948, the museum then moved to quarters in the Halifax Citadel in 1952, and became the Maritime Museum of Canada in 1957.

Floods and fires in the early 1960s caused temporary relocations to a variety of sites until 1965, when a home was found in a former bakery building at the Navy’s Victualling Depot. The Museum became the Marine History section of the Nova Scotia Museum in 1967.

The exhibits remained on Citadel Hill while the offices, library and some of the collection moved to the new Nova Scotia Museum building on Summer Street in Halifax in 1970. Through the 1970s, a long search for a permanent home ensued.

Finally, in 1982, the Maritime Museum of the Atlantic was established on the site of the Robertson & Son Ship Chandlery and A.M. Smith and Co., properties on the Halifax Waterfront. It opened on January 22 of that year. Since then, more than 5.8 million people have visited the Museum.

The Museum is a valuable historical, cultural and educational institution. It is the largest site in Nova Scotia that collects and interprets various elements of Nova Scotia’s marine history. Visitors are introduced to the age of steamships, local small craft, the Royal Canadian and Merchant Navies, World War II convoys and The Battle of the Atlantic, the Halifax Explosion of 1917, and Nova Scotia’s role in the aftermath of the Titanic disaster.