The 1917 Halifax Explosion
Letters from the Family of Vincent Coleman

These letters were written by Mary McGrath, (Minnie), sister in law of Vincent Coleman, the famous railway telegraph operator who died in the Halifax explosion. They were written to her sister, Frances Coleman (Fannie). A second letter was written to her mother. 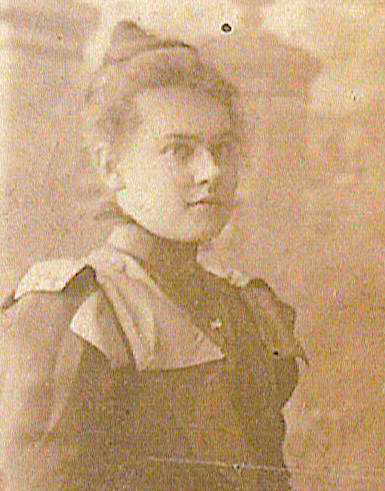 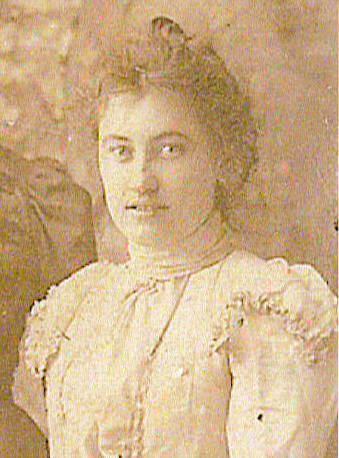 Transcript of letter from Mary McGrath (Minnie) to her sister Frances A. Coleman (Fannie)
Oxford, Dec. 12, 1917

Ned arrived home safely
Monday morning, and I was
so happy to hear you were
doing well when he left.

My dear brave Fannie, keep
up for the sake of the dear
little children. God will
give you strength, and for
that we are praying day &
night. It was only a loving
Providence that saved you and
the children, your escape is
miraculous. Ned says the
children are well and thank
God, not marked. 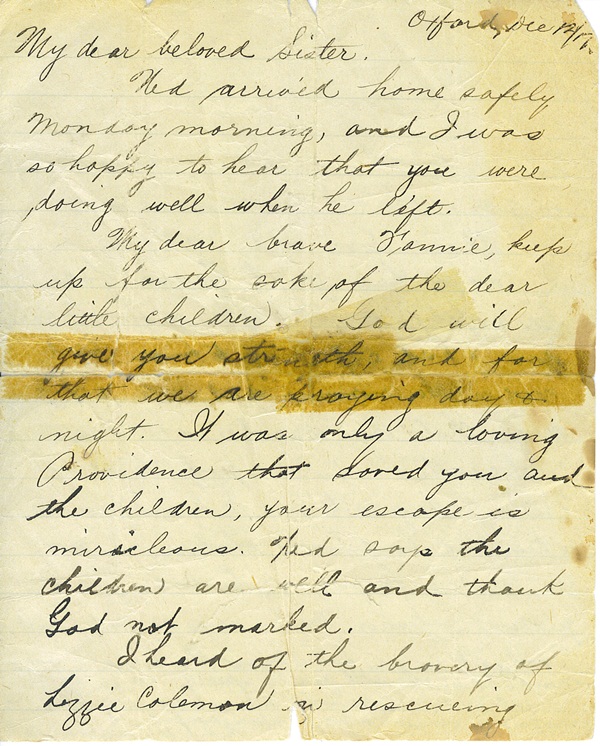 I heard of the bravery of
Lizzie Coleman in rescuing
you and the children, also Sadie
in getting the old gentleman out.

Alas, dear old Halifax -
I always had great fears for
her safety, night after night I have
gone to bed expecting to hear bad
news in the morning but little did I
dream that the disaster would be such
a holocaust. God was good to spare
mother and the girls to you. I know you are
in dear good hands and whatever on earth
can be done for you will be done. I will
go down whenever Mother says so, my heart
is aching to see you but I know the house is full
now but we are with you in spirit. May God
comfort you, my dear sister and we are ready to do
anything in our power for you.

In loving sympathy
Yours, Minnie 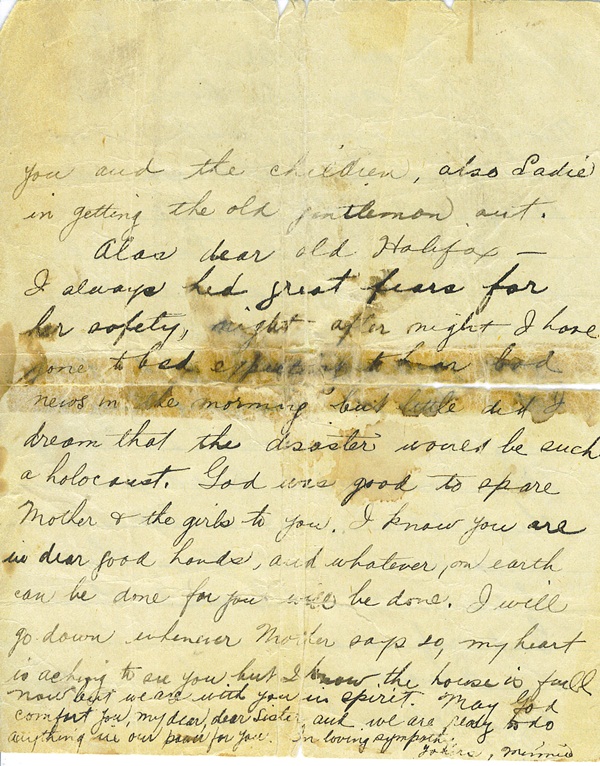 My Dear Mother and Girls -
Thank God you are live and not injured. I heard
twice that Aileen was killed and not hearing about
Daisy or you, I thought you were among the missing.
If you suffered physically, I suffered mentally. Ned left
on the 11 train Thursday, expecting to return at
midnight, but when he got to the Jct. (Junction) and heard the news,
he sent me a note telling me what bits of news he had heard.
Then he did not come and of course, I could not sleep that
night, so Friday noon, I received his telegram dated Bfd. (Bedford)
stating Vincent got killed, Fannie injured, Mother says
stay there. Well, I thought it was his own
mother, or he would have mentioned something of you &
the girls. Then my anguish started. The poor children
they could not understand except Constance. Then
Friday afternoon I received a message from Mary
Doyle saying she had heard claim that Fannie and Vince killed
and it was not until Sunday (?) afternoon that I
saw the Halifax paper (?) and read the long list of
dead and wounded (?) and not seeing your names
I prayed to God you were (?) Poor dear Vince
killed at his post. And dear Fannie injured,
have you good hopes of her? 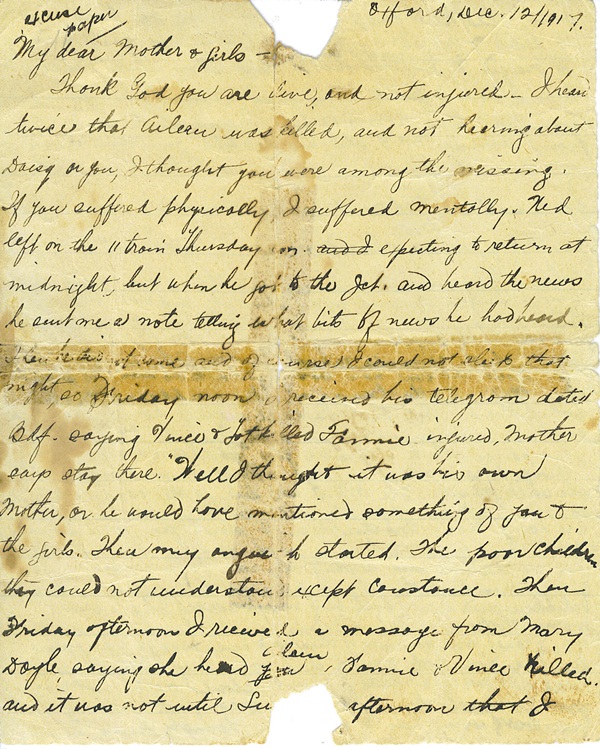 I had a letter today
from Annie McG. ( McGrath) She said he told you she would
write, and that you were all remarkably well, and Fannie
doing well. Central sent me a message she received from
you today which cheered me some. I did not get
Aileen’s telegram until today and that is one reason
that I thought she was gone when she did not wire but
the service was wretched. And I wondered how Daisy would
escape that glass (?) her. But poor dear
Vince at the cannon’s mouth how could he escape? Those
dear sweet children, how good of God was to protect them.
Ned said they have no marks except a cut on the
baby’s head. And poor (Sadies?) little home crushed
so soon. And Aunt Lizzie and Uncle Phil. I am
glad Ed. Is able to stay with you as there are so many
things he can attend to. How about her insurance. I hope
she will get all. The O. R. T (?) are taking the case up and
as soon as I hear definitely we’ll let you know what they
are doing. Now mother dear, I want you to draw my
$200 and give it to Fannie so she can get some warm clothes
for the children and anything they need. I am sending a box
of warm underclothes and rompers for baby also buttermilk,
chicken and eggs (both being very scarce). I have some
warm clothes, coats of the children, my bolster and underclothes
of Ned. Could you dispose of them if I send along? I suppose
you have very little time to think of yourself, I trust you
will not get cold. Well I must close and not worry
you too much praying (?) to comfort you all  in
your hour of sorrow. 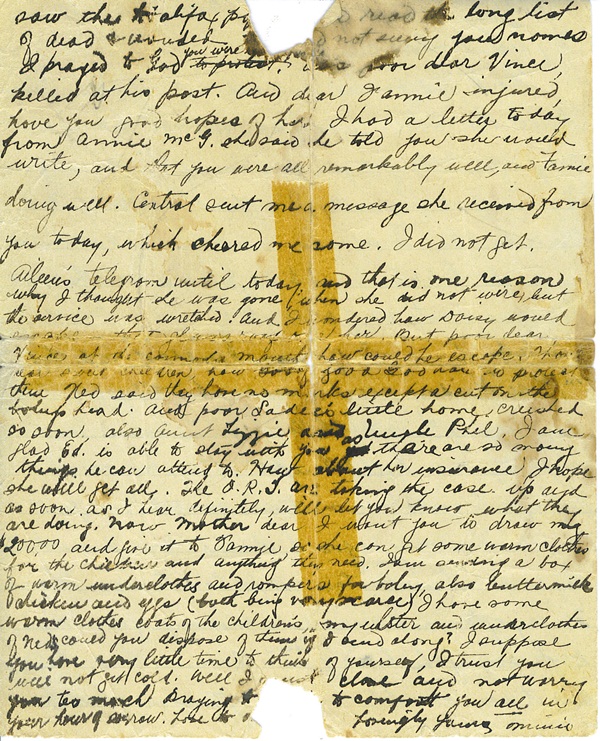 A Deadly Fragment of Mont-Blanc

The museum has many fragments of SS Mont-Blanc, the munitions ship which exploded on December 6, 1917. This piece belonged to Ernest Fournier of Saint-Basile, New Brunswick. This is the grim story of the fragment in the words of his grandson:

Ernest and his brother-in-law, also of Saint-Basile and the local mortician, took the train in Edmunston NB to go to Halifax to help out with the clean-up efforts. While going through debris looking for possible survivors, they came upon the body of a woman. The fragment was embedded in her skull and, not wanting to bring the corpse to the makeshift morgue with this piece of metal sticking out of her head and out of respect, he pulled it out and placed the fragment in his pocket for reasons he could not remember. The fragment came back to Saint-Basile with him and has been in our family ever since. The hole in the fragment was drilled by my Grandfather in order to hang it in his garage where it stayed on the same nail for over 50 years…

Jim Pender was a Halifax native working as a silversmith in Rhode Island at the time of the explosion. He rushed to Halifax to look after his parents. They were unhurt but a fragment of Mont-Blanc had smashed its way through the roof of the family home on Cunard Street.  Mr. Pender cut off pieces of the fragment and set them in silver to make several sets of cuff links, tie pins and brooches, each stamped with the disastrous origins. These were given to his brothers Frank and James Pender.