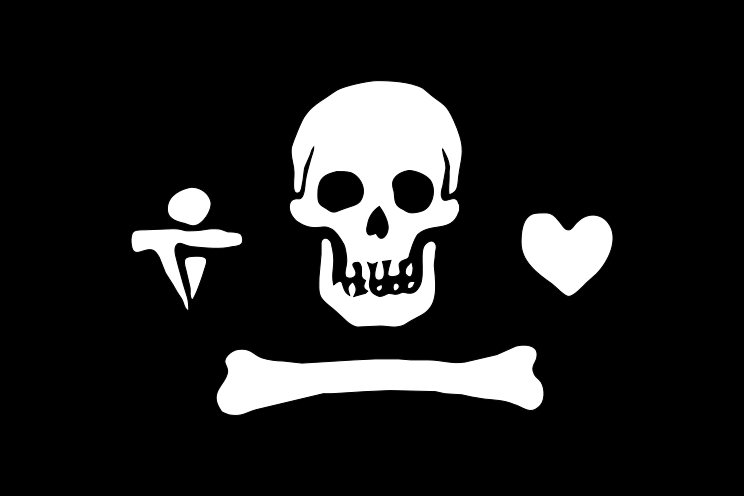 Piracy is murder and robbery at sea. It dates to ancient times and continues today.

The “Golden Age of Piracy” occurred from 1690 to 1730 when Nova Scotia, was largely unsettled by Europeans, making it a possible location for pirates to hide-out or refit.

The governor of Fortress Louisbourg in the mid 1720s was so afraid of pirate attacks in Cape Breton that he asked for extra naval protection.

One of the nastiest pirates of the "Golden Age", Ned Low, raided fishing fleets who used Nova Scotian harbours as shelters and fishing stations. Low terrorized a New England fleet in Shelburne in 1720. Some have suggested that he hid treasure in Nova Scotia.

The law required that the pirates be executed with their bodies displayed in public as a warning to other sailors. The body was covered in tar and hanged from chains in an iron cage called a gibbet. The Royal Navy used the same treatment on mutineers. Two pirates were hanged this way on George's Island in 1785. Another, Jordan the pirate, was hanged at Point Pleasant Park, near the Black Rock beach in 1809. At the same time, the Navy hanged six mutineers at Hangman's Beach on McNab's Island, just across the Harbour. Any ship entering Halifax Harbour in 1809 had to pass between hanging and rotting corpses.

The last major piracy trial in Nova Scotia was in 1844 when a gang of six pirates were brought to Halifax in 1844 when their ship, the barque Saladin, was shipwrecked on the Eastern Shore. Saladin had a cargo of silver bars and a large shipment of coins They had mutinied and killed the captain and half the crew before falling out among themselves. Initially charged with piracy, they were subsequently convicted of murder. Four of them were hanged near the old VG hospital on South Park Street. Two are believed to be buried under the sidewalk at the Library on Spring Garden Road

While they were not pirates, naval sailors and privateers (sailing licensed private warships) personally profited from capturing enemy ships in wartime as they received a share called “prize money” from each capture. Sometimes their aggressive captures gave them a “piratical” reputation.

The pirate, William Kidd, claimed to have hidden treasure before he surrendered in 1699, the only pirate known to have actually hidden treasure. Only one location was verified (Gardener's Island near Long Island, NY). Some people believe Nova Scotia may have been one of his hiding places, although there is no real evidence.

Nova Scotia is rich in pirate folklore where imagination takes over from history. Pirate legends exist for almost every major island in the province. In Halifax alone, George's Island is said to be haunted by two young pirates hanged there in 1784. Hangman's Beach is supposed to be haunted near the lighthouse by hanged mutineers. Also on the island, strange noises and lights were seen in 1845 near Finlay Cove beside a mysterious hole in the ground. Navy Island, in Bedford Basin, is also home to treasure legends, including a whole crew of pirate ghosts who stand guard over the treasure there. At Oak Island in Mahone Bay, treasure hunters have unsuccessfully dug for 200 years.

A refreshing look at piracy in our own backyard by the Maritime Museum of the Atlantic's Curator of Marine History.

Helen Creighton, Bluenose Ghosts
Has a fascinating chapter on pirate folklore. A reliable review of not only the Saladin trial but also many other piracy trials in Nova Scotia.

Thomas Raddall, Warden of the North.
The authority on Halifax history, places Saladin and Jordan trials in context.

Marcus Rediker, Villains of All Nations.
A social and political analysis of the beliefs and way of life of pirates.

Archibald MacMechan, Sagas of the Sea.
A good account of Jordan and the Saladin pirates.

Trial of Jones, Hazelton, Anderson and Trevaakiss alias Johnson for piracy and murder on board barque Saladin
Wonderful source material on the Saladin pirates, printed in 1844, reprinted in 1967.