The Maritime Museum of the Atlantic, in cooperation with the Atlantic Jewish Council and the Canadian Maritime Heritage Foundation, are pleased to present the travelling exhibit, St. Louis: Ship of Fate, a moving and thought-provoking glimpse into a dark moment in Canadian history, when a helping hand was denied. Through first hand testimonials, gripping photography and interactive features, this exhibit strives to create a broader awareness for a tragic story of war and national policy.

On May 13, 1939, the MS St. Louis of the Hamburg-America Line, set sail for Havana, Cuba, with 937 Jewish refugees from Nazi persecution among the passengers. Although they had all purchased legal visas, the Cuban government reversed its position due to the influence of the German government and, when the ship arrived in Havana, she was refused permission to berth. Confusion and panic spread aboard ship as many of the passengers knew what would likely happen to them should they have to return to Germany.

Captain Gustav Schroder made for Florida but despite the efforts of members of Franklin D. Roosevelt’s cabinet, the United States chose not to get involved, citing existing immigration guidelines pertaining to entry visas. In Canada, petitions were sent to Prime Minister MacKenzie King but once again, the quiet anti-Semitism of the era meant that the refugees were turned away.

British and European officials came to an agreement and, on June 17, 1939, the ship finally docked at Antwerp, Belgium. England, France, Belgium and the Netherlands took in the refugees but, as World War II raged on, the refugees found themselves in peril once again. In all, 254 of the ship’s Jewish passengers perished in concentration camps during the war.

Ultimately, this is also a story of quiet heroism, from the passengers who survived and the German captain who did what he could to help the refugees aboard his ship. 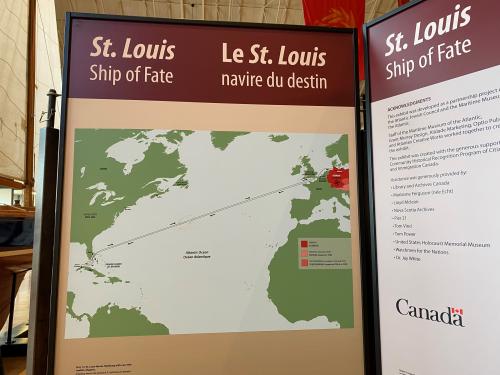 The exhibit is available for rental. Information on the exhibit, including technical specs and suggested display layouts can be found in the exhibit fact sheet (PDF 1 MB). Further information, including suggested public service announcements and other promotional materials will also be made available once the exhibit has been booked.

Booking enquiries can be made by contacting Gerry Lunn, Curator of Exhibitions.